Quick visits to major cities is my modus operandi. It’s becoming a habit, I think, and one I’m not trying to break: eight hours in San Francisco, Rome in 48 hours, three days in Washington, DC, and now a mere twelve hours in the largest city in the USA (and fourth largest in the world, according to one unreliable internet source).   With so much of the world to explore, a little bit is better than nothing. Right?! =)

First, a caveat: I was already in New Jersey so my timeline inside the city doesn’t account for travel time, and I wouldn’t recommend flying all the way across a continent just for twelve hours in a city.  (For San Francisco, I was already there…for Rome I was passing through on my way to Israel…for Washington, DC I was visiting friends in NoVA before turning tourist in DC. In sum, I’m definitely not travelling to these locations merely for one-day visits.)

I was determined not to drive into the city (I’m not that brave/foolish!) but definitely assumed I would be taking the train from New Jersey into NYC. Thanks to the insider scoop of my NYC-loving/expert/sister-in-law, though, our day started on the Staten Island Ferry. And it was brilliant.

Not only did it allow a unique view of the city (and of the Statue of Liberty!!!!) but it’s a FREE ride into the city AND on Sundays there’s no parking fee! Win/win/win. 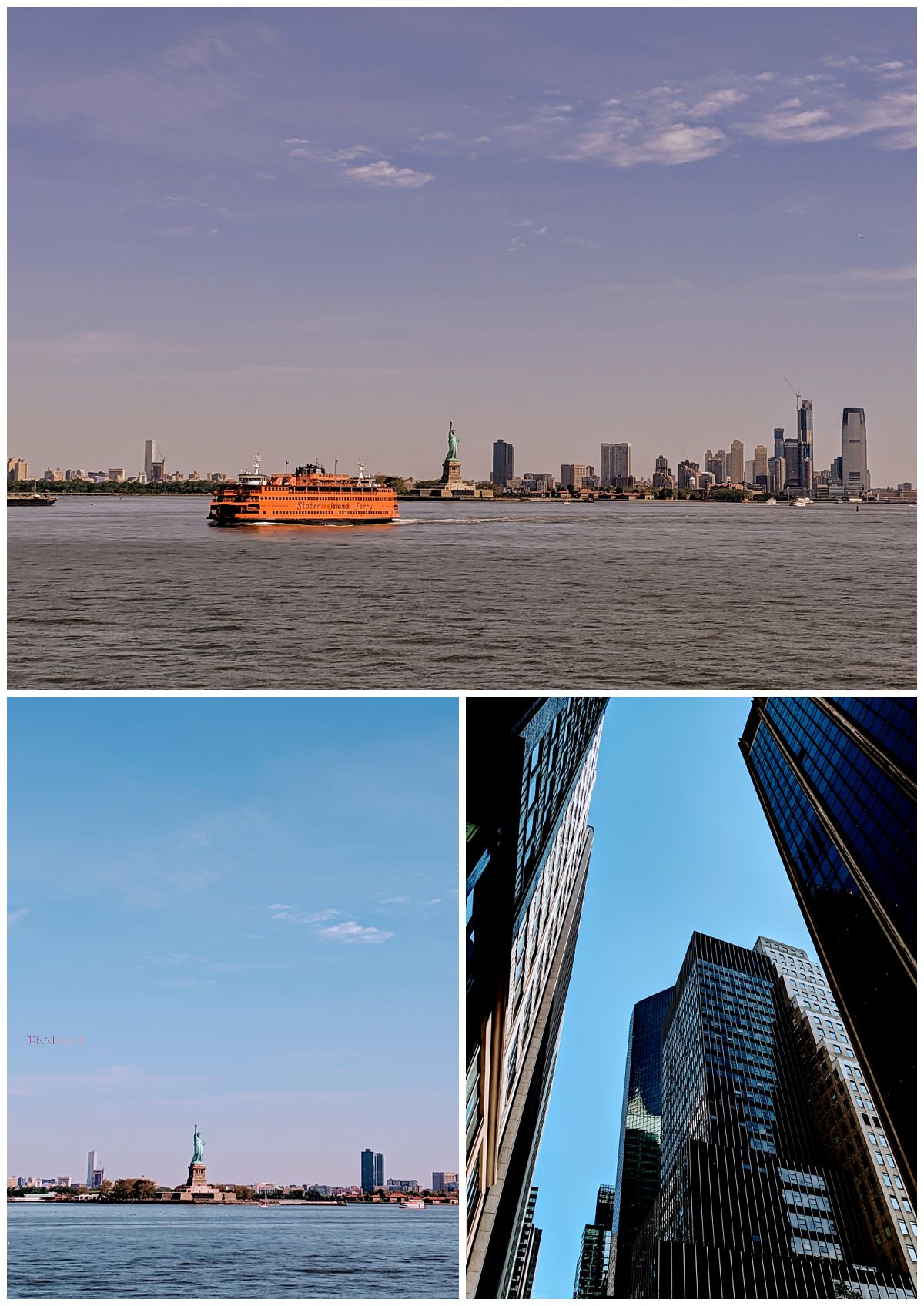 Plus, I love water so being on the water and blowing in the wind and watching the city approach? It was the perfect start to the day.

(To note, though: the $15 toll road to get to the Staten Island Ferry Terminal was cash only. Thankfully that wasn’t a lesson learned the hard way. :-P)

Our first destination was the Brooklyn Bridge, but we very deliberately chose a detour to Van Leeuwen Ice Cream  since we both married Van Leeuwens. (We then had to find a SECOND location of the ice cream shoppe since it was too early in the morning to eat ice cream. =D) 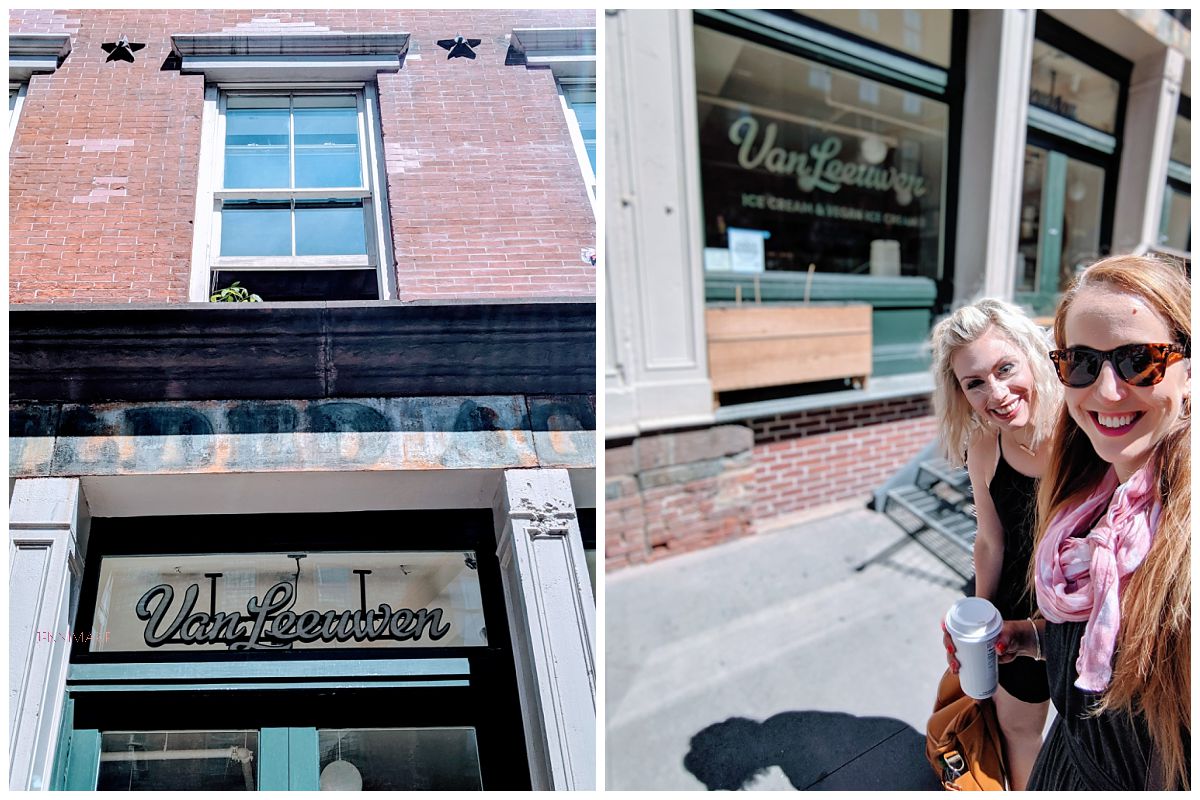 If I learned anything, it’s that the Brooklyn Bridge is a Very Popular Location and these conveniently cropped angles completely ignore the mayhem of walking a bridge with thousands of other people. 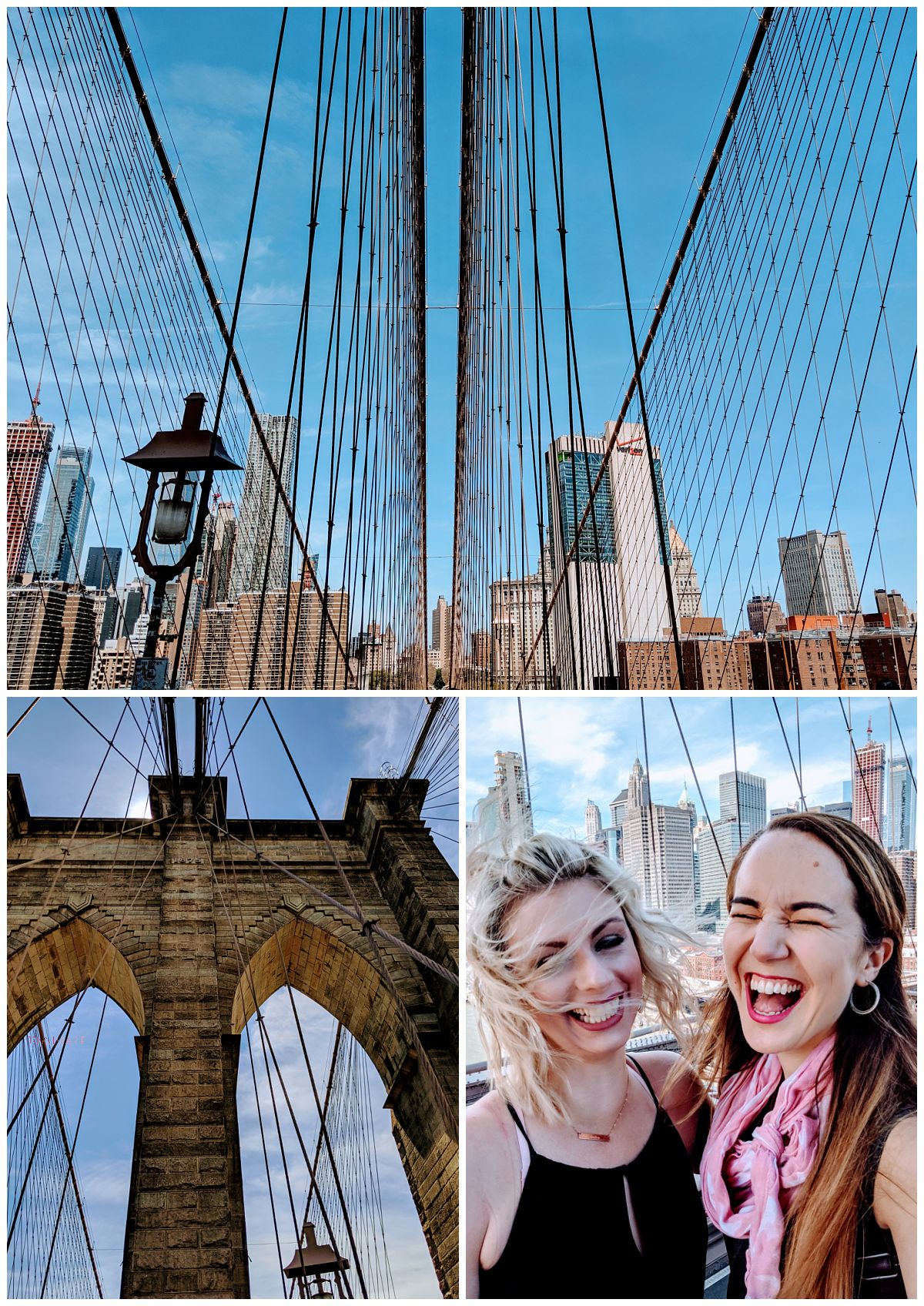 Thankfully, the Subway has a stop right next to the Bridge so our 1.5 miles of walking had a brief reprieve while we rode up toward Central Park and lunch.  Toward Central Park is operative term, because the Puerto Rican Day Parade definitely blocked us from actually entering the park…but we saw it from across 5th Avenue and then detoured to Tiffany’s to look at all the shiny.

Lunch at Serendipity was surprisingly a highlight for our trip (right, Meghan?!) because we basically had the whole restaurant to ourselves (and an entire team of bored waitstaff to refill our water after each sip).  We skipped the Frozen Hot Chocolate (our Van Leeuwen Ice Cream was still to come!) but I loved the colors and textures of decor. 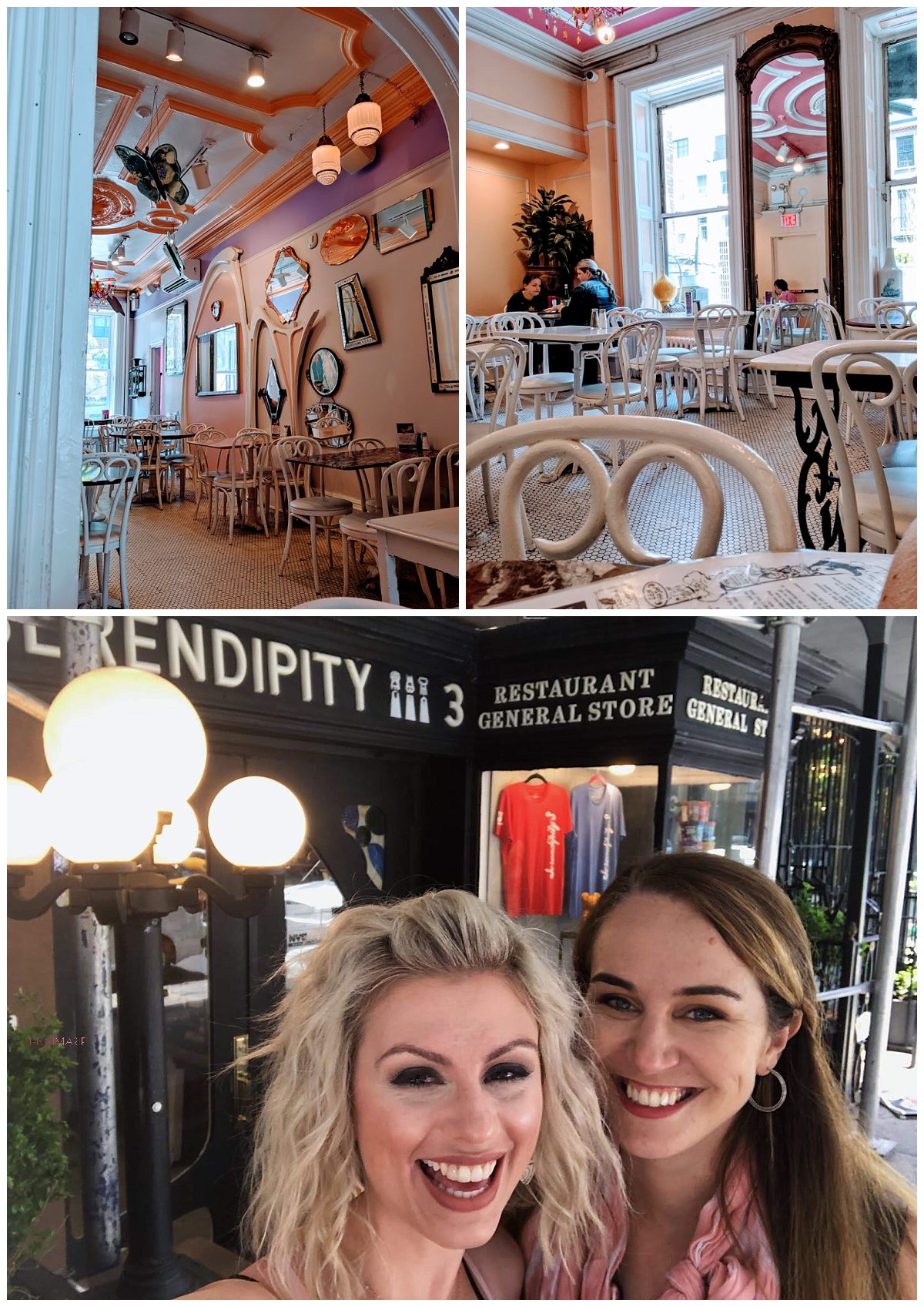 My very first show on Broadway. The end. 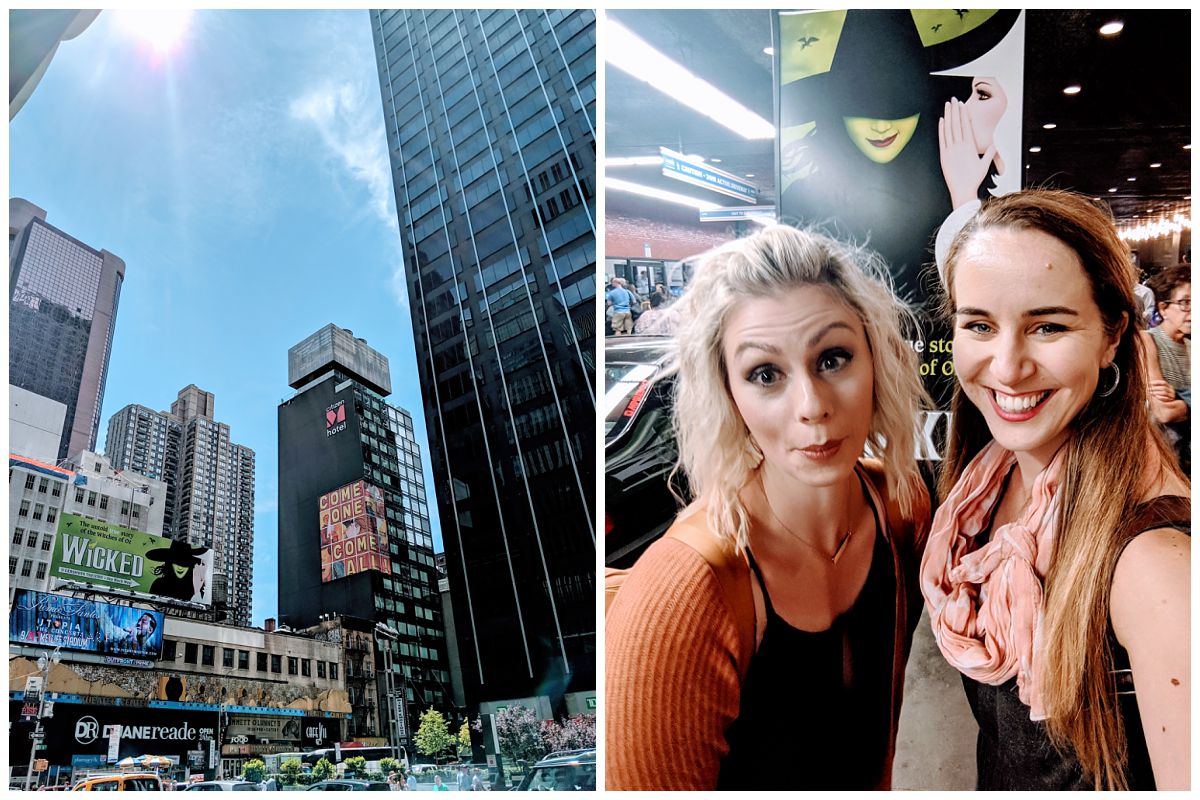 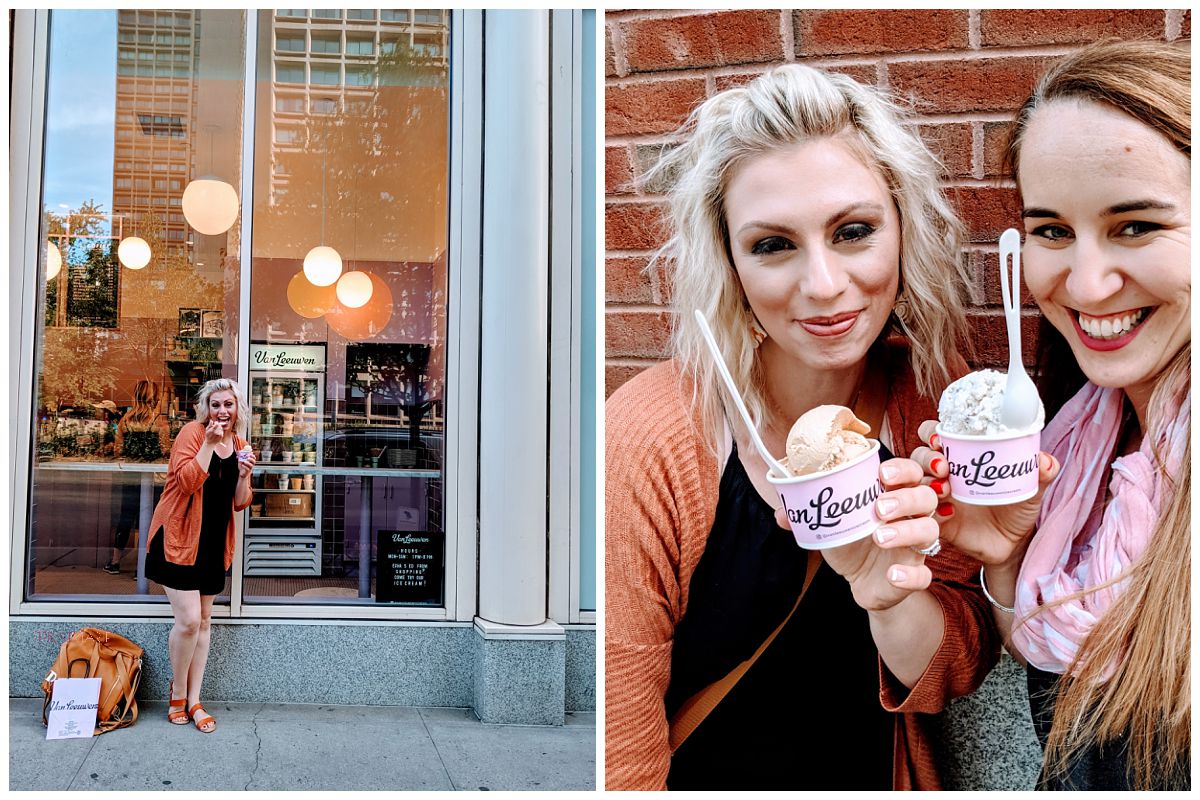 We made time for Times Square (and M&M’s!) then got stuck in the mayhem that ended up being a block of 50th Street closed for the Tony Awards Red Carpet (!?!) before heading back to the Financial District for a dinner al fresco and then the Ferry ride back across the water. 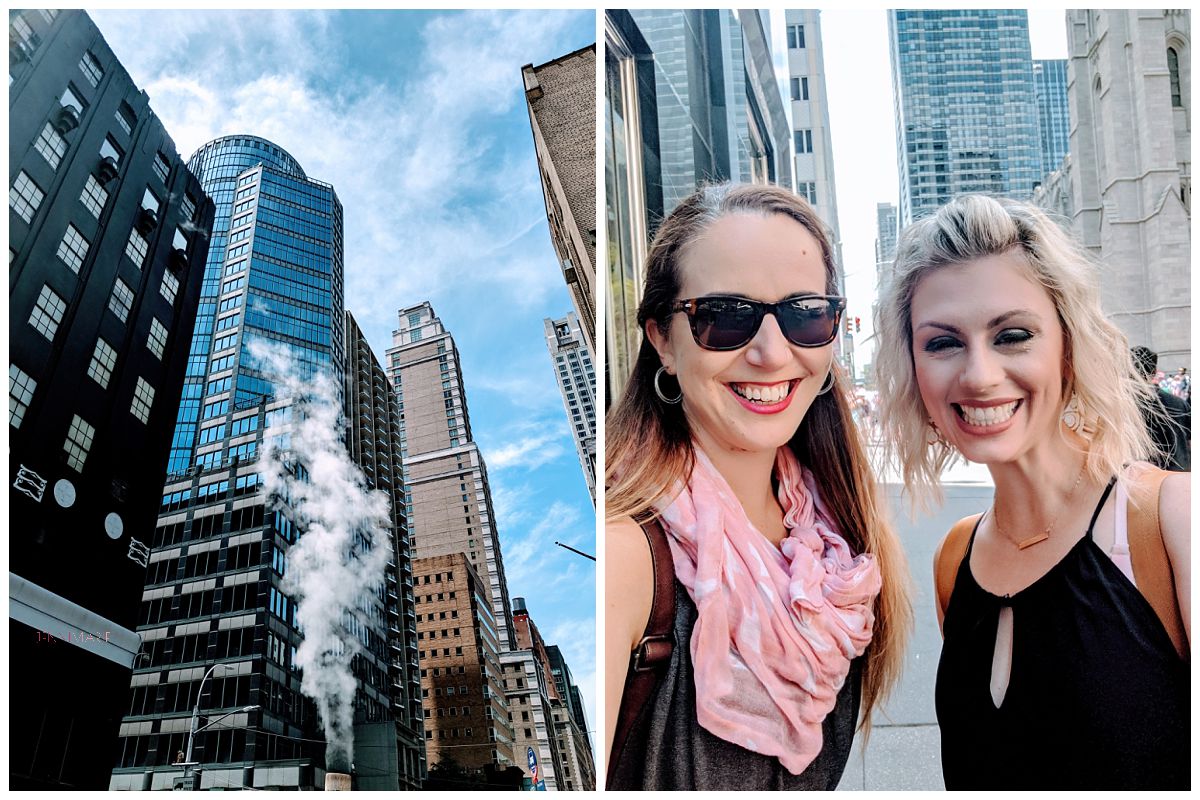 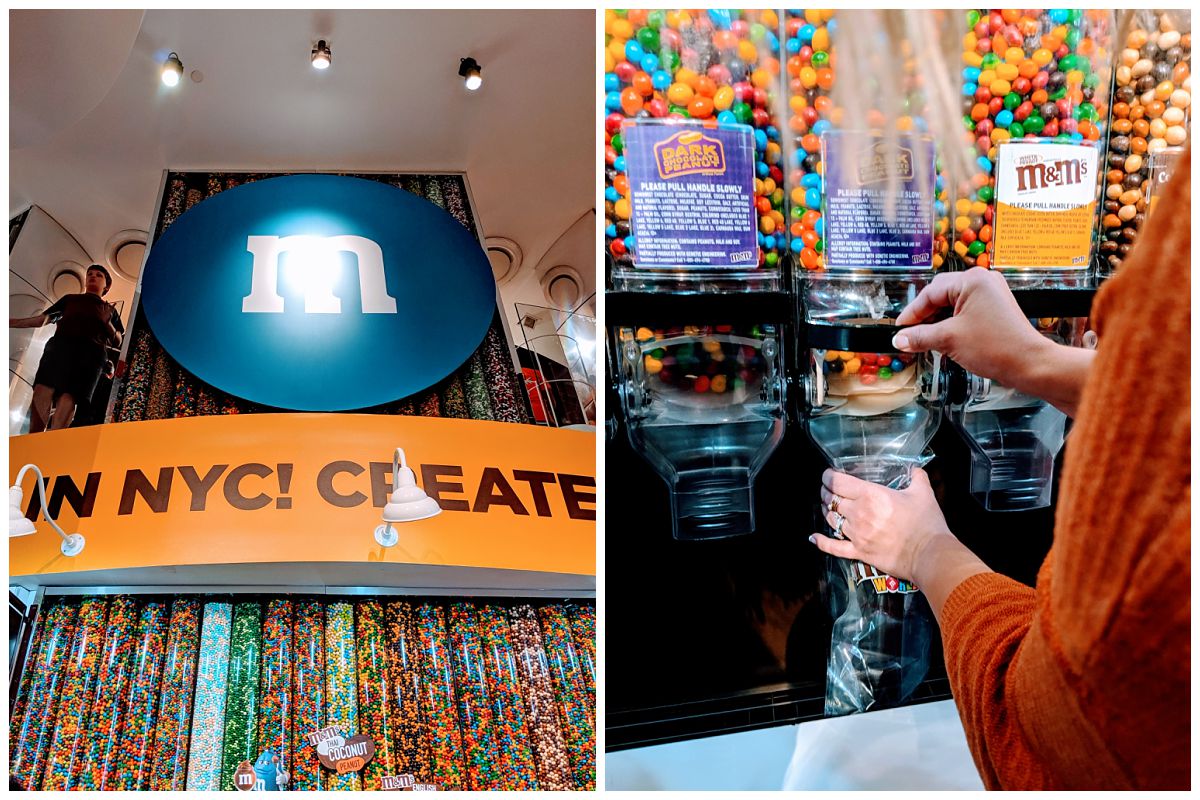 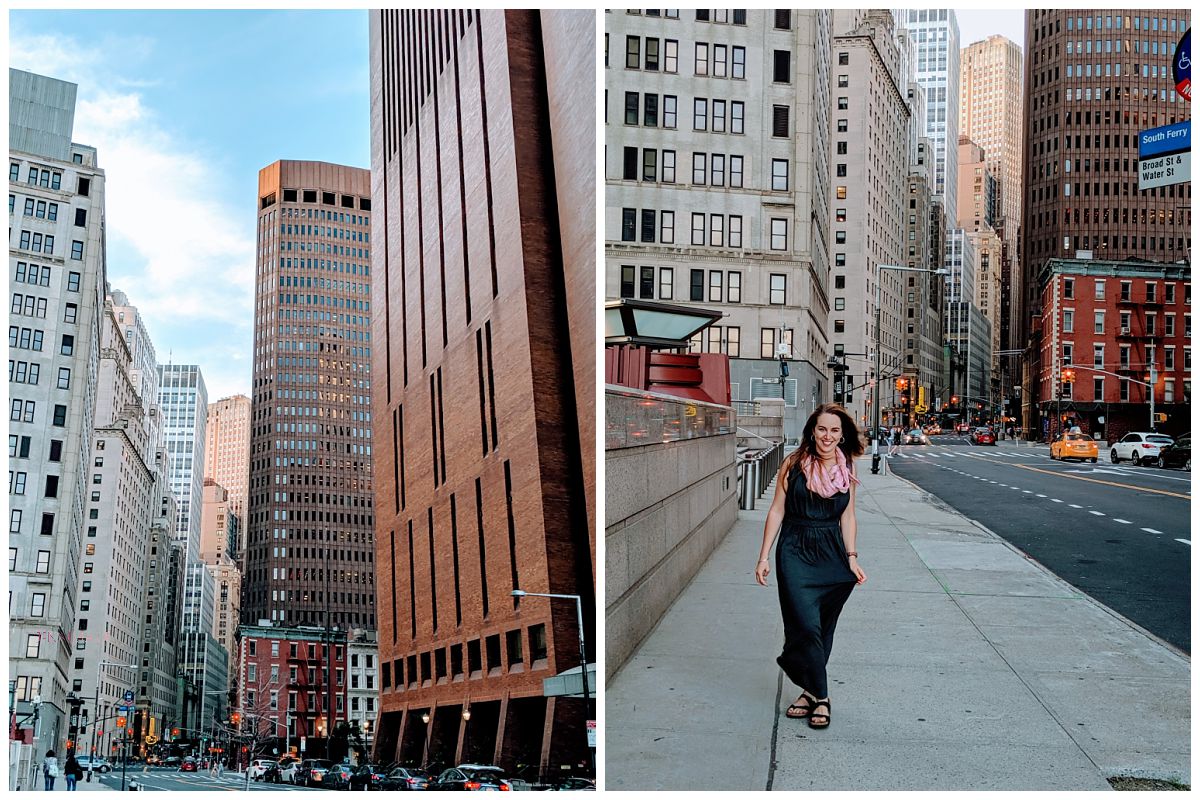 If you need an itinerary for twelve hours in New York, here’s what we were working with:

Times Square/Top of the Rock

(We ended up not getting to do Top of the Rock because the wait was going to be too long. But it would’ve fit into the itinerary if not for that!)